We are grateful to have team members that each bring a unique and valued contribution to the functioning of AfriPaw. In the words of Aristotle, “The whole is greater than the sum of its parts”. We believe in solid structure, accountability, transparency and team work.

Oversight: Our independent Board of Directors provide direction, guidance and support. 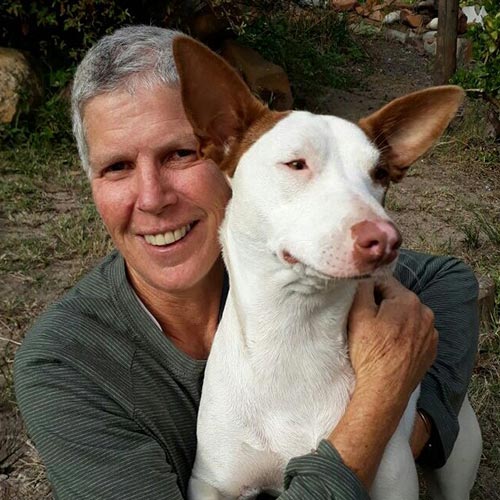 Cecilia has run her own Architectural Practice since 1985 after qualifying from the Cape Peninsula University of Technology. She built her own home in Noordhoek using 80% reclaimed materials.

Her passion is the care and love of all animals. She has reared and cared for many in her time. She co-founded the Animal Welfare Society (AWS) branch in Bredasdorp where she qualified as an Inspectorate Officer. Cecilia grew up in the Karoo but now co-owns a small lifestyle farm in the Cederberg area where the  animal collection is continually growing – mostly rescues.

She loves the outdoors, has run many a mile in the mountains and on the road. After a break from welfare work, she is enjoying being part of Afripaw and the team.

Dr Hernan is the owner and founder of Fourways Veterinary Clinic in Sun Valley, Cape Town. Originally from Argentinia, he studied Veterinary Science at the National University of Central Buenos Aires in Tandil.

In 1981 he moved to South Africa and after a short stint as a pizza chef at Al Ponte Restaurant in Hillbrow, he worked for the Department of Agriculture as a meat inspector, during which time he wrote his veterinary board exams, allowing him to practice as a vet in South Africa. He worked at the SPCA in Booysens in Johannesburg for two years before moving to Cape Town and joining the SPCA in Grassy Park, where he worked for six years. In October of 1989 he founded Fourways Veterinary Clinic, where he currently still practices. Fourways has been instrumental in helping establish AfriPaw.

In his spare time, Hernan enjoys surfing, going to the gym and hiking. He also loves travelling. Hernan lives in Capri and has two adult children, Lila and Juan. He also has six fur-kids – a Labrador called Tucker, two Pitbulls called Amber and Cooper, a crossbreed called Nona, a Daschund called Scooter and a cat called Nube.

Mélanie is a communications specialist and technical advisor for community development programmes. Mélanie has a private sector background in Corporate Communications and Public Relations, which shaped her practice driven approach. With her work she focuses on programme development, planning and management, providing technical support and is conducting solution- and action-oriented research. She has worked with governments across the African continent and collaborated closely with a variety of organisations such as UNICEF, WFP, GAIN, and Concern Worldwide.

In 2011 Mélanie moved to South Africa. She lives in Noordhoek with her husband, son and three canine fur-children who are all rescue dogs. She loves the outdoors and has been passionate about animals and their wellbeing since her early childhood. Being part of AfriPaw has been a dream come true.

Susan Mc Cready is a Chartered Accountant(SA) and brings an accounting skills oversight to the team. She practices independently from her home in Clovelly in the tax field with the aid of two enthusiastic furry assistants, namely her dog, Amber and a small black cat, Starling. Susan is a born and bred Capetonian.

She qualified as a Bachelor of Science from the University of Cape Town in 1992, but in 2000, pursued a conversion course to Accountancy. She completed her articles at Fisher Hoffman PKF. After a decision to specialise in tax, Susan joined the KPMG Cape Town Tax department where she enjoyed a valuable ten years being educated in all things tax, after which she took the plunge to go independent.

Nowadays Susan works in the individuals’ tax space and is the primary tax service provider to clients of Chalford Wealth Investment Management in Fish Hoek. Although highly dedicated to assisting many individuals to comply with their income tax obligations, Susan enjoys beach and mountain walks with her dogs and friends.

On the ground: We have no salaried staff.  All our work is voluntary.

Anél is the Co-Founder of AfriPaw. She qualified as a Public Relations Practitioner at Cape Peninsula University of Technology in 1995 and completed the practical component of her studies at the Cancer Association of South Africa, focusing on education and fundraising. She worked in Public Relations for various local organisations before moving to the UK in 1999, where she specialised in Event Management at PricewaterhouseCoopers. Since moving back to South Africa in 2007, Anél free-lanced for a number of NGO’s in Cape Town before joining REAP (Rural Education Access Programme) as Communications Manager in 2011 on a part-time basis. Anél is passionate about animals and is also a keen medium-distance road runner. She lives in Fish Hoek with her husband and five fur-kids.

Felicity is AfriPaw’s much loved and respected “go-to” person in Vrygond. She is from the Eastern Cape but owns her own property in Vrygrond Avenue, which is the main access road into Vrygrond, making her location ideal. Felicity is passionate about animals and has been instrumental in helping AfriPaw gain the trust of the community and establish ourselves as a reputable and accepted animal welfare organisation amongst the residents. Felicity is a part-time domestic worker and is also actively involved in her church. In her free time, she sells pet food at greatly reduced prices to the community of Vrygrond, signs up sterilisations and plays a very important part of our regular spay days and outreach programmes. Felicity has four children and four fur-kids.

We have built up a team of 30 committed and hard-working volunteers who help us at Spay Days and Clinics. Our work would not be possible without these precious people. We are always looking for more volunteers, as we don’t want to over-burden anyone, so if you are interested to help out at any of our Spay Days or Clinics, please contact Anél on 072 6161 207. (Regret no children under 18)